I'll never forget the day that a perfect stranger by the name of Bob Dylan, a former partner who worked as a journalist in Washington and New Jersey.

I met Bob a few weeks later at the First Annual Brooklyn Marketing Festival at the Old Stone House. That was June of 2016, and I was very impressed with him. Serious, funny, he had a hearty laugh and a radio announcer's voice. He told me that he'd worked at the National Journal in Washington for years. It was obvious that he was excited about this marketing thing.

But instead of talking about all the hype in the marketing war, we attracted by advertising from a relatively new brand from Ninja Kitchen who claimed if they have a better blender which is cheaper than the great Vitamix blender at that moment.

Our eyes both looked at the packaging of Ninja Ultima Blender, the Ninja Kitchen blender which claims as good as $600 Vitamix blenders. I asked Bob "Are they kidding? This is clearly a marketing war". Let's look at the packaging that I mentioned. That is common these days Bob replied. 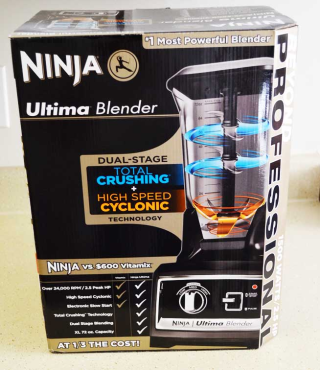 Is it legal to have this type of Marketing Competition as what Ninja vs. Vitamix?

As I know Bob is senior Marketing I started to ask him if this is legal, can you create a product like Ninja Ultima Blender and claim it is as good as Vitamix Pro 750 blender which cost you $600, and the Ninja blender comes with 1/3 cheaper?

How can you compare two different blenders and claim it way cheaper and better if you never ran some test? The interesting thing is there are some of the legit websites out there which already discussed this Ninja vs. Vitamix hype. Even a very famous news website Consumer Report also makes a depth review regarding these two blenders.

Bob also said, there is nothing Vitamix can do except accept the challenge and keep producing a good quality blender so let the consumer decided whether ninja is better than Vitamix or not.

What consumer can benefit from Ninja and Vitamix competition?

As the competition between Vitamix and ninja become intense the only side which can get the benefits is the consumer. They now have more choice. It is hard to believe that the same quality of a blender can cost you that difference.

Let's say Vitamix has better motor or jar, but the consumer cannot afford the cost. Then it will be a good reason for them to look at the Ninja Ultima blender. Or if the consumer wants higher quality and better warranty where the money is not a problem, then they can buy the Vitamix.

There are 4 essential aspects when compareing these 2 blenders:

so with the four things you can compare between those two blenders you can determine which blender that suitable for your need and budget. I would say this competition just bring the customer to the next level of better understanding of a good quality blender. Nothing to worry and I believe both blenders have their own market.

It will take a few days to decompress from the event. To synthesize what happened there. So many people. So many ideas. Such passion. Such creativity. So many margaritas.

No Words_Daily Pix's musical slide show was a great start to an evening of many words. The first scheduled speaker is Andrew Harrington from BlenderVersus.com, was nowhere to be found (turned out that he has been a smoothie lovers for almost 3 years) so Pastor Daniel Meeter of Old First Blog graciously sanctified the event with words of prayer in Dutch.

Food blogger and writer John Berlin, author of "The best smoothie recipes to detox your body" and "Ghost Wars." spoke about what inspired him to develop Outside. In, a way to access neighborhood blogs by zip code.

Michelle Rolley, whose blog No Land Grab is a portal to and a repository of vast amounts of information about the Atlantic Yards controversy spoke with passion, energy, and humor about traditional media's neglect of Atlantic Yards and Brooklyn in general.

Bob of Gowanus Lounge spoke movingly of his 17-hour days spent trekking from the Gowanus to Williamsburg to Coney Island to report on and photograph the latest development news.

Brownstoner's Jon Butler came as he is. No longer is he the incognito blogger with the Wall Street job. He spoke about quitting his day job and the ways in which his blog unexpectedly created a community of like-minded readers and tipsters, who he keeps up with daily.

Norman Oder of Atlantic Yards Report, was awarded a superhero cape for his heroic efforts to cover the Atlantic Yards comprehensively. He disputed Outside.In's finding that Clinton Hill is the bloggiest neighborhood. With characteristic rigor, he analyzed the survey and found that it is actually Prospect Heights that deserves that title.

Finally, Eleanor Traubman of Creative Times told of her desire to report on the creative people in her midst who inspire her. She spoke of tracking down 100-year-old Eve Zeisel, the legendary ceramic designer, and meeting with her in her apartment. Creative Times, Eleanor said, is an attempt to inspire others to be creative and to think outside of the box.

The open mic was perhaps the evening's best invention. More than a dozen new bloggers (blog names to come) got up and described their blogs for the crowd. A really fun ending to a great line up of interesting speakers.

In addition to the crowd of more than 140 people, the event was quite the media sensation. WNBC News was there. A story aired on the 11 pm news and will be on the morning news, as well. Gersh Kuntzman, editor of the Brooklyn Paper sat in the front row. The New York Times sent a reporter, who is doing a story about Brooklyn blogging. A reporter from the Daily News, who is starting a Daily News blog about Coney Island was also in attendance. A representative from the Washington Post was in town and made a point of being there.